July folk are said to be fun-loving, cheerful and independent. Ruby is their stone and it’s said to bring good fortune to those that wear it (though whether those in possession of a ruby need more good fortune is debatable) for, much like their clear relative the diamond, rubies can be incredibly valuable. Often used in simply set rings, their intense colour means they don’t need a lot of fuss. But it is this eye-catching colour that can also be used to add accents, such as gleaming eyes in an elaborate diamond encrusted snake or leopard piece. The purest colour of ruby is known as pigeon’s blood, a fact which gives rise to the idea of working on a red-eyed pigeon collection. 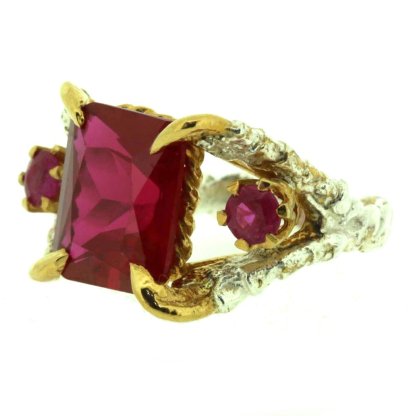 Ruby is also the symbolic stone of 40 years of marriage, making a gift of ruby jewellery on this occasion meaningful and poignant. But if it’s your birthstone you may want to indulge in your own love affair celebrating its other meanings of health and wisdom. Like Dorothy, who took her ruby slippers off the feet of the squashed wicked witch, you don’t need to wait forty years to get involved. Go on an adventure with a Lion, Scarecrow, Tinman and the all important pup Toto. Alternatively find some inspiration from these jewellers, who are clearly besotted with rubies and not thinking about trotting them down any yellow brick roads anytime soon.

Crushed and combined precious stones that bring a new dimension to these unique pieces by Kelvin Birk, making them more wearable in their informal ‘spacefragmentness’ than a typical setting.

Grasping claws, gilded boxes and indents in irregular bands are a few of this imaginative jeweller’s repertoire for showing off precious stones.

This little ruby is benefiting from the hands-on approach to stone setting of Fraser Hamilton.

Why not get to grips with stone setting or find out more about gemstones in one of our courses.

Lil Adams is the London Jewellery School Sundays Studio Manager. Lil studied Fine Art in Leeds and lived in Melbourne before travelling about and settling in London. She now works at the British Architectural Library and enjoys making jewellery with found and natural objects and is shamelessly addicted to casting.