Weary or rested from celebrating or resting over the December break, January may feel like a rough month to have a birthday. But these January folks are not down-hearted. They are ambitious leaders, who love to learn new things and take living seriously. They also have a cracking birthstone in garnet to back them up, thought to bring strength, good health and prosperity.

This beautiful rock can be found in many colours but most commonly in the red of almandine and pyrope garnets. Iron and magnesium cause the colour differences in these stones.

Garnet has been used in digit decoration from Romans times, with these simple styles still holding their own in contemporary adornment as we see here in this mercury ring by Astley Clarke. 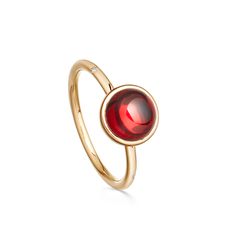 It is thought that the name garnet derives from the Latin for pomegranate ‘granatum’, due to the similarities of colour of the fruity innards. This is a possibility explored in detail by ‘Winged Lion‘ jeweller Sergey Zhiboedov with their garnet pomegranate pieces.

Another fruity offering comes from Alison Maclead with this ring that suggests a cluster of berries or grapes.

London Jewellery School tutor Helen Walls often illustrates the point that a single gem against silver is a winning combination and proves this again with a simple blood-red garnet droplet from a textured hoop.

So if it’s a little or a lot of your birthstone you wish to pin down to your crown. Have no fear to start the year, take the lead and get some inspiration in one of our classes.